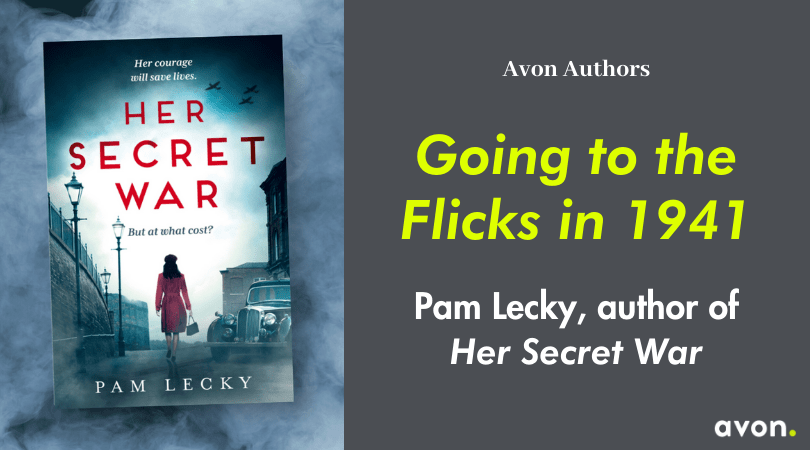 Pam Lecky, author of Her Secret War, discusses film in 1941.

Like most young people in the forties, my heroine, Sarah Gillespie, in Her Secret War, is obsessed with cinema and spends all of her hard-earned, but meagre wages, on film tickets and cinema magazines such as Picturegoer Weekly. The world she sees on the silver screen is very different to her life and feeds her dreams. For someone like Sarah, growing up in a working-class part of Dublin, the regular trip to the picture house was pure escapism. During WW2, a third of most Britons went to the cinema at least once a week and it is likely the statistics were similar here in Ireland. My father often spoke of his weekly trips as a child to ‘the flicks’ with his friends and could tell you all about the various cinemas in Dublin and the types of films they showed. Sadly, most of those cinemas are long gone now.

And then of course, there was the Hollywood glamour filling the pages of the fan magazines, which transported readers far away from the realities of war. Much like the social media influencers of today, the movie stars’ lives influenced popular culture, fashion and music.

In Britain, the fictional trials and tribulations of favourite movie stars on the screen resonated with a public reeling from the Blitz. For a couple of hours, you could forget about the bombs dropping on your neighbourhood, the discomfort of nights spent in an Anderson Shelter or your next bombing run.

So, what were the top three movies in cinemas in 1941?

Citizen Kane: When a reporter is assigned to decipher newspaper magnate Charles Foster Kane’s (Orson Welles) dying words, his investigation gradually reveals the fascinating portrait of a complex man who rose from obscurity to staggering heights. Though Kane’s friend and colleague Jedediah Leland (Joseph Cotten), and his mistress, Susan Alexander (Dorothy Comingore), shed fragments of light on Kane’s life, the reporter fears he may never penetrate the mystery of the elusive man’s final word, “Rosebud.”

The Maltese Falcon: In this noir classic, detective Sam Spade (Humphrey Bogart) gets more than he bargained for when he takes a case brought to him by a beautiful but secretive woman (Mary Astor). As soon as Miss Wonderly shows up, trouble follows as Sam’s partner is murdered and Sam is accosted by a man (Peter Lorre) demanding he locate a valuable statuette. Sam, entangled in a dangerous web of crime and intrigue, soon realizes he must find the one thing they all seem to want: the bejewelled Maltese falcon.

How Green was my Valley: Huw Morgan (Roddy McDowall), the academically inclined youngest son in a proud family of Welsh coal miners, witnesses the tumultuous events of his young life during a period of rapid social change. At the dawn of the 20th century, a miners’ strike divides the Morgans: the sons demand improvements, and the father (Donald Crisp) doesn’t want to rock the boat. Meanwhile, Huw’s eldest sister, Angharad (Maureen O’Hara), pines for the new village preacher, Mr. Gruffydd (Walter Pidgeon).

However, for one of the dramatic scenes in the book, which takes place in a cinema, my characters are enjoying Cottage to Let, an English spy film (very apt – if you read the book!), when the sirens sound and the cinema has to be abandoned. The film stars Leslie Banks, Alastair Sim and John Mills and a very young George Cole. Set in World War II Scotland, its plot concerns German spies trying to kidnap an inventor.

In today’s modern world of TV and streaming services, it is difficult to comprehend the importance that cinema had for public morale during the war. But perhaps we have had a taste of it during the pandemic; let’s be honest – most of us have binge-watched on streaming services or the TV to take our minds off it.

Initially, when war was declared in the UK in 1939, the cinemas were shut. Protest was immediate and within 2 weeks, the order was rescinded. This was in no small part down to objections from the likes of George Bernard Shaw, the Irish playwright, who wrote to The Times, querying the logic of shutting down entertainment.

‘What agent of Chancellor Hitler is it who has suggested that we should all cower in darkness and terror “for the duration”?’

As it transpired, cinemas were an invaluable means of both entertaining and instructing the public, however, it was also a major channel for war propaganda and was used by both the Allies and Nazi Germany to keep the public fired up with nationalism, and supportive of the war.

With nothing to keep her in Ireland and a burning desire to help the war effort, Sarah seeks refuge with relatives in England. But before long, her father’s dark past threatens to catch up with her.

Sarah is asked to prove her loyalty to Britain through a special mission. Her courage could save lives. But it could also come at the cost of her own…

A gripping story that explores a deadly tangle of love and espionage in war-torn Britain, perfect for fans of Pam Jenoff, Kate Quinn and Kate Furnivall.