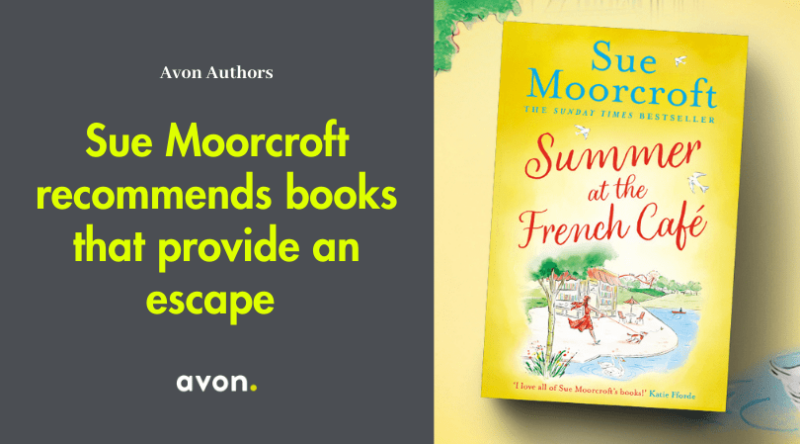 I love books that carry me away. Some provide armchair travel, which is something I’ve valued more than usual in the past couple of years, but others take me to a different time or headspace. Here are five that have stayed with me.

Tempted by the Runes by Christina Courtney

It’s a little tongue-in-cheek to choose this specific Christina Courtney novel, because Kat recommends it to Noah in Summer at the French Café! But she recommends it precisely because Noah’s looking for something to distract him from his worries. What better than a book that not only carries him to other wonderfully evoked countries (Ireland, Sweden and Iceland) but to long-ago times? I’ve been an admirer of Christina’s romantic timeslip novels for ages and have no trouble seeing her fascination with Vikings. Her research is brilliant.

The Little Teashop in Tokyo by Julie Caplin

I was lucky enough to visit Tokyo, though years ago. The Little Teashop in Tokyo revived my memories, especially as it’s set in cherry blossom time, which coincided with my visit. I wasn’t quite so keen on being reminded of the Japanese tea ceremony, because when I participated in one I was convinced that the water had come from a nearby pond. However, through Fiona and Gabe, I was transported back to the sights and sounds of Tokyo, which provided the perfect backdrop for their spirited story. I read it in a day, which, for me, is the mark of an absorbing novel.

A Postcard from Paris by Alex Brown

This isn’t a timeslip novel, but it does have two timelines – 1940 and the present day. Both settings were so skillfully wrought that I had no trouble moving between the two, unified as they are by papers left by 1940’s Beatrice and discovered by present-day Annie. The contrast between the two times was fascinating. There are dark shadows moving over this book, as you might expect when part of it is set in World War II, but the warmth and love triumph and the descriptions of Paris made me want to book a ticket on the Eurostar.

An Escape to Provence by Sophie Claire

Although I’ve travelled to France several times, I haven’t visited Provence (unless you count through the pages of this lovely book). Sophie is half-French and her familiarity with the landscape and the culture of Provence shines through. I loved Daisy’s slow transformation from workaholic, her eventual ability to question what she’d hitherto taken for granted and evolve her ideas of what she wants from life. I wasn’t quite so forgiving of Gabriel at first, as he feels he ought to have the farmhouse that Daisy’s inherited, but I warmed to him the moment Daisy did. Sophie sets up the perfect ‘if you get your dream, it means I can’t have mine’ conflict between the two, and I was glued to the story as it unfurled.

Playing for Love by Jeevani Charika

This is a bit of a different choice as Playing for Love isn’t set in another country or time – it’s set in the world of computer gaming. Until I read it, computer games were of no interest to me, yet Jeevani not only introduced me to the world with a light touch but managed to bring about a love story in which both protagonists have a real-life identity as well an online one. Heroine Sam is also Bravura and hero Luke is also Blaze. Somehow, Jeevani weaves together Luke having a crush on Sam, while Sam has a crush on Blaze, without confusing the reader. I found myself as invested in Bravura and Blaze’s online adventures as much as in Sam and Luke’s everyday lives.

Choosing just five books for this post was difficult! I love escaping through the pages of a book – either through reading or writing. I hope you’ve enjoyed my choices.