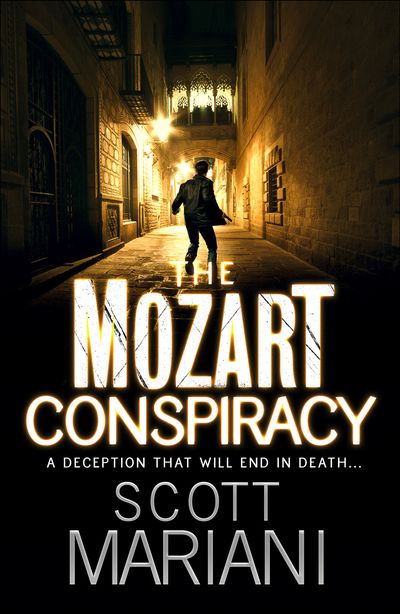 FROM THE #1 BESTSELLING AUTHOR

Former SAS operative Ben Hope is running for his life.

Enlisted by the beautiful Leigh Llewellyn – world famous opera star and Ben’s first love – to investigate her brother’s mysterious death, Ben finds himself caught up in a centuries-old puzzle.

The official line states that Oliver died whilst investigating Mozart’s death, but the facts don’t add up. Oliver’s research reveals that Mozart, a notable freemason, may have been killed by a shadowy and powerful splinter group of the cult. The only clues lie in an ancient letter, believed to have been written by Mozart himself.

When Leigh and Ben receive video evidence of a ritual sacrifice being performed by hooded men, they realise that the sect is still in existence today…and will stop at nothing to remain a secret.

From the dreaming spires of Oxford to Venice’s labyrinthine canals, the majestic architecture of Vienna and Slovenia’s snowy mountains, Ben and Leigh must forget the past and race across Europe to uncover the truth behind THE MOZART CONSPIRACY…

The Ben Hope series is a must-read for fans of Dan Brown, Lee Child and Mark Dawson. Join the millions of readers who get breathless with anticipation when the countdown to a new Ben Hope thriller begins…

Whilst the Ben Hope thrillers can be read in any order, this is the second book in the series.

Author: Scott Mariani
Format: ebook
Release Date: 29/05/2009
ISBN: 978-0-00-732903-8
Scott Mariani is the author of the worldwide-acclaimed action-adventure thriller series featuring ex-SAS hero Ben Hope. Scott’s novels have topped the bestseller charts in his native Britain and are translated into over twenty languages worldwide. To date the Ben Hope series comprises the #1 Bestseller The Alchemist’s Secret, The Mozart Conspiracy, The Doomsday Prophecy (published in the USA as The Hope Vendetta), The Heretic’s Treasure, The Shadow Project, The Lost Relic, The Sacred Sword and the forthcoming The Armada Legacy (May 2013). Scott is also the author of the bestselling Kindle eBook novella, Passenger 13. Scott’s novels have been described as ‘James Bond meets Jason Bourne with a historical twist’.

FROM THE #1 BESTSELLING AUTHOR