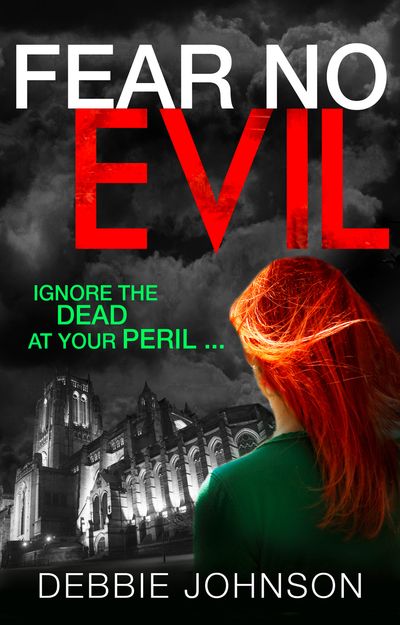 THIS PAGE-TURNING THRILLER WILL HAVE YOU UP ALL NIGHT!

Jayne McCartney, Liverpool’s only female private eye, is soon to get a crash course in this and other ghost-related facts.

Until now she’s kept her snooping firmly to the dodgy, sometimes dangerous – but definitely human – Liverpool underworld. But that all changes when an elderly couple approach her with a terrifying story…

Their daughter, a 19-year-old student, died falling from her halls’ window. But she didn’t jump, they insist – she was pushed. By a ghost.

Who or what is walking the halls of Hart House? And will this case end up haunting Jayne forever…?

Author: Debbie Johnson
Format: ebook
Release Date: 21/10/2014
ISBN: 978-0-00-812194-5
Debbie Johnson is a former journalist who lives and works in Merseyside. After a lifetime of reading crime, romance and fantasy, she now writes all three.Fear No Evil is Debbie’s first novel featuring private detective Jayne McCartney, drawing inspiration from both the city of Liverpool and her own time working in the local media. Although Debbie has never been a private eye herself, she is extremely nosy, and likes to piece together her own versions of reality by eavesdropping on conversations, watching people at the bus stop across the road, and imagining crime scenes as she walks her dog. Because it’s always the people who walk the dogs who find the bodies. Find out more at www.debbiejohnsonauthor.com

THIS PAGE-TURNING THRILLER WILL HAVE YOU UP ALL NIGHT!