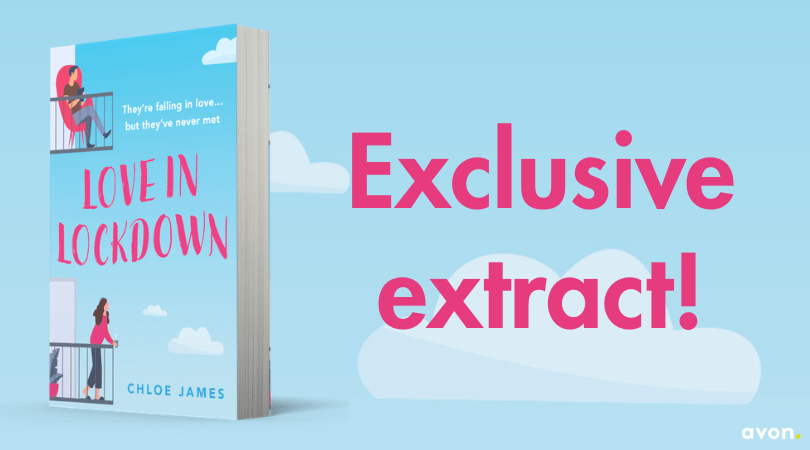 Exclusive Extract from Love in Lockdown

Read an exclusive extract from Love in Lockdown by Chloe James

‘Mmm,’ I say noncommittally. Jess is fab and I adore her, but I can tell this is her I’m-about-to-start-trying-to-manage-your-life tone.

‘I happened to come across this app the other day that could have been designed for you.’

I know exactly what kind of app she means and it will certainly not have been designed for me. ‘Jess, we’ve been all through this. It’s kind of you but . . .’ Erica has her jacket on and gives a little wave from across the room. ‘Just a mo, Jess – bye, Erica, take care won’t you?’ She gives me a sympathetic smirk as she vanishes out the door.

‘Erica’s just off for her shift. She’s amazing – I would hate to go and deal with birthing women, especially in the middle of a pandemic,’ I gabble to Jess, hoping it might distract her from the conversation.

‘Yes, but we’re all different aren’t we, Soph? Anyway, Hinge is a dating app that helps you meet someone nice and normal. Even you can’t go wrong. How about it?’

‘Hinge? Sounds like something to do with a door.’ I’m trying my best, but there’s no distracting Jess when she gets like this.

‘Ha-ha, come on, Soph.’ She hears my silence, which is hopefully deafening. ‘Okay so maybe you haven’t heard of it; you are getting on a bit now.’

‘Thanks a lot.’ I roll my eyes. ‘It’s nearly time for the NHS clap. Don’t you think you’d better go and get ready?’

‘It’s only seven-thirty and we only have to go to the window. It’s really not that far.’

‘Yes, but I need to make sure my hands are warmed up ready for my best clapping,’ I say.

‘No, the dating thing. I’ve done it, I’ve signed you up to Hinge. You’re welcome.’ As always with Jess, it’s a fait accompli. I remember the time we vaguely discussed getting Mum and our stepdad a holiday weekend away as a surprise and before I had confirmed I could pay my share, she had booked it and paid the deposit. Jess has a heart of gold but goes at everything at a hundred miles an hour.

It’s a fact that she doesn’t ever give up. I hate dating apps. I have managed to avoid Tinder so far, having heard too many horror stories. It’s so not my thing. These people could be anyone; how do you know the photo is even them? I’m a bit old-fashioned. For me there’s some­thing so impersonal about meeting online.

‘Jess, it’s very thoughtful, but you know how I feel about apps. I was going to get back into dating slowly; I have this idea of actually meeting someone in person, getting to know them properly. I had it all planned.’

‘Yes, but now we’re in the middle of a lockdown you’re kind of limited for options, hon.’ My sister is ever practical.

‘It’s so frustrating,’ I admit. ‘I was all geared up for a fresh start. Joining some fitness groups, book clubs – you know the sort of thing.’

‘Not going to happen now for ages, so you’re going to have to get creative and Hinge is quite good actually. Danni at work used it. She’s been going out with this guy for six months now and he is really nice and normal.’

‘Well that’s a start,’ I say with a laugh, ‘except you know I am far from normal – it’s way too boring. And I would rather meet someone first. God knows who you find on these apps. They could be a stalker.’

‘You’re going to have a hard job finding a stalker in the current situation. Most people aren’t able to go out,’ Jess tells me. ‘And in any case, Hinge is really cool. It’s not like other apps – it’s not random and you can only contact a certain number of people. Also, you have to have things in common or it won’t let you contact each other.’

‘Why is it called Hinge anyway? If you’re unhinged you’re not allowed to join?’

‘Yeah right. I don’t know but I’ve just pinged across your account details.’ My phone bings at the arrival of a message.

‘Thanks, it’s good of you,’ I say patiently, wanting to throttle her, but I know she’ll never change.

Love in Lockdown by Chloe James is available in ebook, audiobook, and paperback now.