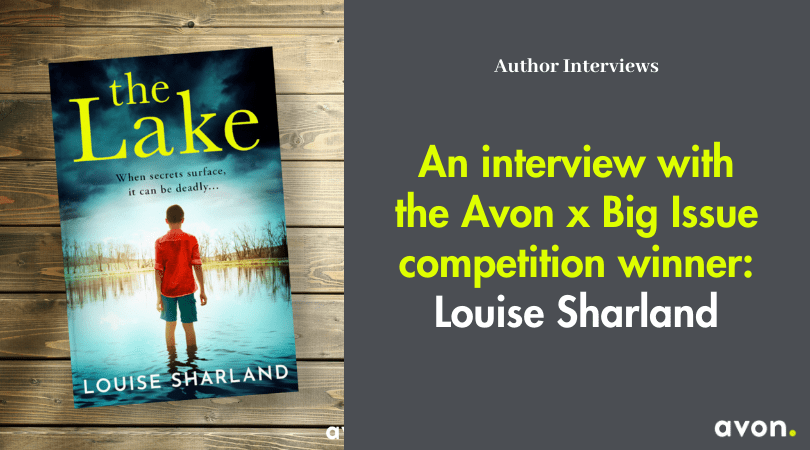 An interview with Louise Sharland

One of my previous roles was working for the homelessness charity Crisis UK as a Work and Learning Coach, so I have a deep connection with the work of The Big Issue – some of my clients even went on to become successful Big Issue vendors. I still buy the magazine whenever I can, and that’s how I found out about the competition.

I’ve just been doing some pretty intensive, but hugely beneficial, editing with my Avon Editor, Molly Walker-Sharp. I feel this process has really helped me to develop and elevate my writing. It’s really a question of scrutinising my work more closely, and I’m now starting to automatically find things I can improve.

Then it’s straight into book two, another psychological thriller which is full of plot twists culminating in a very big shock ending. I’m also working on a crime series, and then starting research on my dream project about crime, punishment and redemption, set in 1970s Montreal. Don’t ask me about sleeping – that just doesn’t seem to happen at the moment!

I started out writing short fiction and was really buoyed by winning the Woman and Home Magazine Short Story Competition in 2010 with my piece Black Rock. This was subsequently published in an anthology entitled The Best Little Book Club in Town, alongside writers like Ruth Rendall, Lee Child and Jojo Moyes. I’ve also had some sci-fi/near-future fiction published in a University of Exeter Anthology entitled Imagine There’s a Future. It was these successes that made me think maybe I could make it as a novelist as well.

Hugely! Just four days before I had the email from Head of PR Sabah Khan at Avon telling me I’d won the competition, I’d received my twelfth rejection from an agent. Even though I really, really believed in the manuscript, I’d decided it was time to shelve it and move onto something else. I have to be honest though, there were lots of those ‘I’m not good enough’ moments. However, a few days later I was informed I’d won the Avon x Big Issue Competition, and all that self-doubt just washed away.

This is a really interesting question. I always thought the only route to publication was through an agent, but this competition has proven to me that there are other avenues to seeing your work published. I would highly encourage any writers out there to take part in competitions of this sort (try to find ones without an entry fee if you can). Winning the competition has, first and foremost, given me a renewed confidence in my writing and has also introduced me to the fantastic team at Avon, HarperCollins.

What super bunch of talented, empowered young women I work with!  From the moment I received that email from Sabah, and then meeting Molly, it has been a friendly and relaxed relationship with all the team. They are genuine, professional and kind, and whenever I visit them in London, I always bring West Country fudge!

There have been so many great bits so far! It’s not just the thrill of winning, then visiting the Avon offices in London (though that was a thrill!), and the reality of my book being published, but also the opportunity to improve my skills as a writer by working with a talented team. My work with Molly has really helped me to take my writing to a professional level.

I’m going to cheat here a bit and offer three pieces of advice:

So copy edits for The Lake, then right into my second book with Avon. I’m really interested in themes around why good people do bad things. This book really explores that angle! Otherwise, I hope by the time The Lake is out next year there will be opportunities to attend literary festivals and even run some workshops. I previously taught creative writing for six years, and I love working with other writers to help them make the most of their writing.