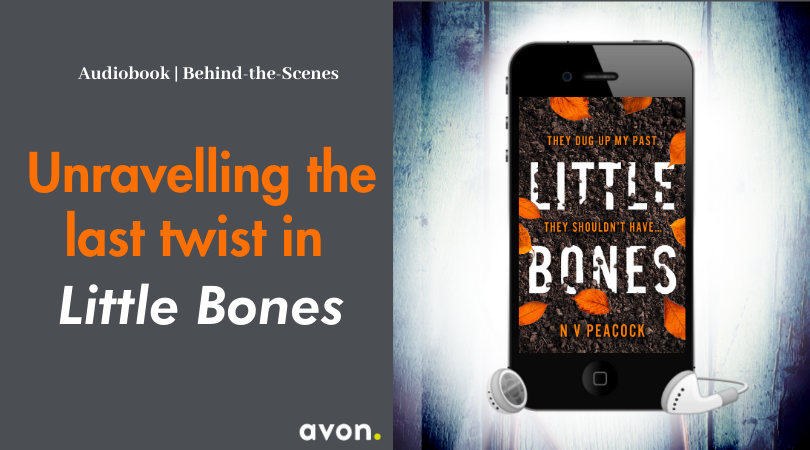 I love a good audio book, I’ve listened to them for years. They can make mundane housework interesting, long car journeys shorter, and wet rainy days brighter. When I was a little girl and felt low, I would build a fort with my bed sheets, curl up with the family dogs, and listen to the books on tape I borrowed from the library. Played on my little pink tape recorder, narrators would virtually take my hand and lead me through some of the best stories around. My parents were fortunately easy-going on the genre of books I took out, so I found many of my favourite authors this way: Anne Rice, Stephen King, and Clive Barker – yes, even as a kid my tastes ran dark! It was like having a creepy bedtime story whenever I wanted it.  Add in a mix-bag of sweets and I was in heaven!

As an aspiring author, it was always the dream to have my book as an audio. Little Bones, along with the amazing teams at Avon and HarperCollins, made that dream come true. Listening to my words spoken by actors and narrators such as the amazing Stephanie Racine, Raj Ghatak (who starred in of my favourite zombie series Dead Set by Charlie Brooker) Lisa Armytage, Jessica Ball, Candia Gubbins, Richard Trinder, and last but not least, the seductively scary John Sackville as Mr Bones, was surreal to say the least.

When my publisher asked me to write extra content for the audiobook, I became excited and worried in equal measure. Little Bones would be the first audiobook Avon would include podcast-style extra content in. That’s a lot of responsibility! I didn’t want to disappoint the reader and simply pad out the story with extra scenes, so spent more than one sleepless night conjuring just the right content to compliment and add to the story, along with a final twist that will not only make sense, but will shock the reader.

Interviews seemed the perfect medium for this content. Throughout Little Bones, podcaster Jai discusses current crimes, past crimes, and puts forward wild and unsubstantiated theories on his podcast The Flesh on the Bones– all of which adds to protagonist Cherrie’s ever-growing list of problems.  But, in the book, the podcast is limited to its creator’s thoughts, as he alone dictates his episodes. With interviews, readers would get the opportunity to know Jai better, and also learn more about the supporting cast of characters they meet in the book.

Podcasts often interview people within the periphery of a crime and sometimes, if they are popular and lucky enough, they talk with someone in the centre. Having spent nearly two years with these characters, I jumped at the chance to have them speak for themselves. Characters who had brief appearances within the book now had a chance to get across their side and talk to the listener. There was also another opportunity. When I write a novel, I plot out the book with military precision. I have to ensure the story hits the notes it needs to keep pace, and that the twists are both seeded and all tied up at the end.  But, as I write through the necessary scenes, characters develop and have their own way of pushing the story out of the box I originally put it in. They tell their own stories and, even as their creator, I can sometimes watch helplessly from the side-lines as they refuse to do what I tell them to and turn the final twist, I so carefully planned, into something new.

While writing Little Bones, one character practically screamed at me to tell their real story, why they were there, what they were doing, why they acted the way they did, but with already going over my word count and having tied up all my suspects, I left their story out. The extra content in the audiobook was the perfect place to let this character speak. You’ll have to listen to the book to find out who this is and what they say, but I’ll tell you this, even knowing it was coming, hearing the actor saying those words sent shivers down my spine!

So, what are you waiting for? Download my debut thriller Little Bones on audiobook right now. Make yourself comfortable in your favourite spot. Maybe brew a nice cup of tea or coffee. Grab a packet of your favourite biscuits (Malted Milks are my personal favourites) and let Cherrie and Jai take you on a twisted ride through true crime podcasts, horrific crimes, and killers. Just remember to keep the lights on!