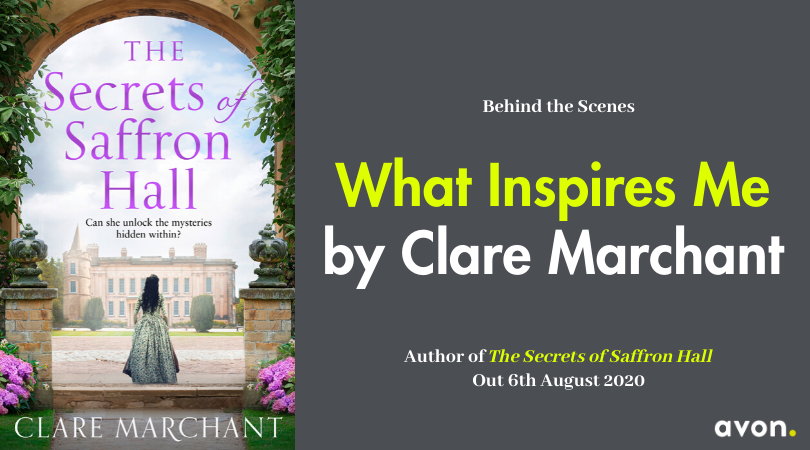 What Inspires Me | Clare Marchant

In sitting down to write this, and really thinking about what inspires what I write about, I’ve realised that the one thing that ties together all that I write about, is connections. We’re all connected in life, to other people, to places, even to objects that we’re especially fond of, and I’m fascinated by those bonds.

Those people who know me, know that I am a complete and utter history nut, and this has a huge influence on what I write (and what I read!). Whenever I visit a historic site, or a museum or gallery, or even reading an article about a new discovery of an antiquated item my mind is immediately whirring away, wondering about who lived there, who owned something, why people were in a certain place at a certain point in their lives. Did someone suddenly find themselves living in a home that they hadn’t wanted to move to, like Eleanor does in The Secrets of Saffron Hall? Certainly in Tudor times (which I love!) women could be moved from house to house by their husbands and have no option or an opinion of their own.

I always love visiting old houses but even more so, derelict castles and priories – we’re incredibly lucky in the UK to have so many amazing historical sites to visit. I especially like to wander around the ruins of priories desecrated by Henry VIII, and we have quite a few here in East Anglia. There is something quite ethereal about the atmosphere in these ancient buildings and it makes me wonder not only about the relationships between the people who once lived there, but also a connection between them and us, today.

As I wander around the derelict walls I like to imagine that if I close my eyes I can almost feel the brush of a coarse wool habit as a silent monk sweeps past. Or that if I strain my ears I can hear a few notes of Gregorian chant drifting on the wind. Can we connect with people who once lived there and walked those paths, across the centuries? I much prefer to visit these places when there aren’t many people about and they are peaceful and silent – my family are now used to ‘weird mum’ wandering around slowly with her eyes shut – other people may not be so understanding! It was whilst I was walking around the ruins of Binham Priory in Norfolk one very cold and windy Easter Monday that I had the first shoots of an idea that eventually became The Secrets of Saffron Hall.

The connections that I feel are not just confined to places. I find myself asking the same questions about historical artefacts as well. When I wander around old graveyards (yes, keeping my eyes open or I would be tripping over all the time!) I like to read the headstones and wonder about the people, the lives they led. There’s a connection there. And in galleries when looking at portraits I can’t help wondering about the models and what sort of lives they led when they weren’t sat in a studio, posing. Likewise, when I’m at a museum I can’t help but speculate about the original owners of old books and personal items. Who drank out of that cup, or read that book? Did they sit up late until the candle burned down because they didn’t want to stop reading, turning the pages late into the night?

Everything, every place, every person has a connection and it’s the interweaving of time, people and artefacts that fascinate and inspire me.