The main character in The Silent House is a British Sign Language interpreter called Paige Northwood, and when she receives an emergency call-out from the police she finds herself thrown into a murder investigation.

I had known for a while that I wanted to write a novel featuring the Deaf community – after spending most of my teaching career working with students who used British Sign Language, and supporting Deaf families, I saw that here was a community who were under-represented in fiction. As a reader, I’ve found that most novels that feature a deaf character have just that: one single deaf character, rather than a community of people with a common language and culture.

Whilst some deaf people do live their lives entirely in the hearing community, with hearing friends and family, using only a spoken language, this wasn’t my experience. The deaf students I have worked with are educated with other deaf students, have friends who are deaf and socialise with other deaf people outside school. I have known families with deaf parents, step-parents and children, other families with some hearing members and some deaf, where they all communicate using a mixture of BSL and English, and other families where all of the members are hearing except for one child. The Deaf community is a microcosm of the hearing community, with many of the same features and issues, but also with aspects of their culture that are specific to them, and I wanted my novel to reflect that. 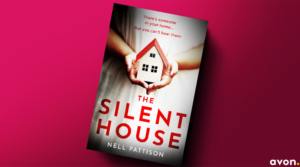 The plot was, sadly, inspired by a true story. I read an article about a young child who died whilst in a house with two family members. Both adults insisted that nobody else had been in the house, and so each blamed the other. The police weren’t able to gather enough information to prosecute either of them, so nobody was convicted, and there was no justice for the young victim. This devastating situation stayed in my mind for some time, and I found myself thinking, what if those adults were both deaf? They wouldn’t know if the other person was to blame, or if someone had come into their house. And so the story grew from there.

Paige, the main character, went through a few different incarnations before I decided how to write her. She started off as a hearing police officer with Deaf family members, but with that idea came the complications of writing a classic police procedural. After that, she became a Deaf journalist investigating a cold case, but I found it difficult to see how she could gain access to the information she needed. The realisation that she could be a BSL interpreter came at 3 o’clock one morning! This role gave her access to the police investigation, whilst also giving her wider scope to interact with the other characters in a way that reached beyond the interview room.

Living with a progressive hearing loss myself, I feel it is so important for fiction to contain a diverse range of characters because there are potential readers from every culture, nationality, ethnicity, religion, disability, gender and more. Everyone deserves to see someone they can relate to reflected in fiction, and by reading about characters whose lives are very different from our own we can develop greater empathy. That said, my main purpose when writing The Silent House was to entertain, to write a book that readers of crime fiction would enjoy, but with an element that set it apart from other novels in the genre, and I hope I’ve achieved that!