In 2015 we sold our house in Cheltenham to someone who was moving out of London. She declared it absolutely perfect (and then spent the first year knocking seven bells and several walls out of it.)

Devon has more thatched houses than just about any other county and we were determined not to buy one. Despite this we were almost seduced into buying a 16th century cottage that was picture perfect and set in its own delightful valley. There was an immaculate garden and several beautiful trees complete with a pair of nesting woodpeckers. Then we discovered the delightful valley at the bottom of the garden routinely flooded and we would be sharing the house with a battalion of Death Watch Beetles who were placidly munching away at the main cross beam of the house. We thought again.

In May 2015 we moved into our lovely house on top of a hill between Exeter and Crediton, still convinced we were downsizing. (It wasn’t until we moved in that we realised we hadn’t.) The house had been empty for a year, the garden was overgrown and neglected but we have never regretted the move.

The first thing we did when we moved here was build a garden office, which I share with my husband.

Our daily commute is now twenty-five steps; I just counted them. I have a proper desk where I work just about every day. I am in charge of filling the stationery cupboard too! Any writer will know how much fun that is. I mean going into an office supplies superstore or Paperchase or Smiths and calling it work related is a dream! 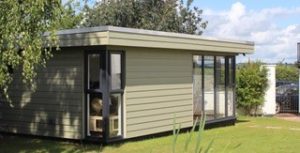 My husband has a desk opposite mine where he carries on working as a Consultant in the pensions industry. From having to travel all over the country he now works from home too and we are happy as clams. Occasionally he will have a conference call and we all know men on the phone are impossible to ignore. They shout. Occasionally there is shouting and pacing too. When that happens I either go and make coffee or put in the earphones to listen to BBC Radio Devon, which is my daily companion; I love it. Gordon Sparks and the Gordon Hour, David Fitzgerald and his improbable radio crossword competition or Janet Kipling and her Devon Debates – there are enough plot ideas there every day to keep any writer thinking.

We have great rail links, which can get us to London in two hours, we are at the end of the M5 and there is an airport.

Occasionally I attend a writing group in Exeter that meets once a month where I can meet up with some really encouraging people, Margaret James, Stella Duffy and Teresa Driscoll to name but three. I just wish I could go more often.

Does the Internet distract me? Well of course. I am an avid Twitter user and I have been known to check my Amazon reviews once or twice…

A Year of New Adventures was also written here and now I’m deep in the edits for book three, Come Away With Me, which will be published this August. I am three quarters of the way through book four – also set in the Devon countryside – which is due to be published in early 2019. 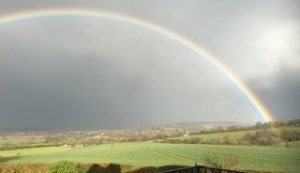 The scenery here is glorious, our local pub is the award winning Beer Engine, our neighbours are friendly and welcoming and the starry skies at night are wonderful. My husband has always been interested in researching his family history and found details of ancestors who had lived nearby in 1674. Perhaps something called us back here? To us this is the very best place to live.